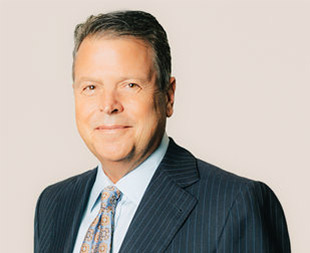 John Wolff is a senior partner handling complex litigation, class actions and other difficult disputes, often involving life sciences, oil and gas, construction, environmental legacy and toxic tort claims. John has earned a reputation as a high-stakes courtroom lawyer, at the trial and appellate levels, representing major national corporations in trouble in Louisiana. John has been involved in just about every large, contentious case in Louisiana for the last 30 years, trying many to verdict and, when it is to his client's strategic advantage, settling. For example, he has successfully defended local and state agencies, public and private companies and individuals in:
Explosions, accidents and other losses – on oil rigs, industrial locations and the like – with deaths or significant injuries, including the July 1999 explosion at the Kaiser Aluminum & Chemical Corp. plant in Gramercy, LA
Catastrophic levee, maritime and other post-hurricane damage
Contractual, merchant and premises liability, insurance coverage, immunity and admiralty-related disputes with exposure upwards in the hundreds of millions of dollars
Bet-the-farm defense work involving professional malpractice and liability, faulty construction, product liability (including Chinese drywall, medical devices and pharmaceuticals) and asbestos and other toxic tort claims
Legacy claims for environmental damage, such as the Bayou Corne sinkhole litigation
He also successfully defended the hydropower industry in a recent decision upheld by the US Supreme Court. John has represented Chubb Corporation for years in Louisiana (a direct-action state) in complex matters, showing a sophisticated understanding of multiple layers of insurance coverage and their impact at all stages of a case. In addition to being good on his feet in front of judges and juries, John can pull together and deploy a legal team and skillfully manage big cases behind the scenes, with massive document discovery and Keogh Cox’s paperless management, multiple parties, joint defense, confidentiality agreements and other complexities. John has also been a leader in the use of courtroom and case management technology, providing greater assurance to his clients and allowing for easier access, assessment, sharing, presentation and responsive communication of reports, documents, pleadings and exhibits. John is a highly-regarded leader in Louisiana's charitable and legal communities, too. He has served, for example, as a guest speaker for the Louisiana Association of Defense Counsel and on the Louisiana State Bar Association's Bench and Bar Section's Ad Hoc Judiciary Committee. Throughout his career, he has been active on non-profit boards, in particular those helping at-risk children.