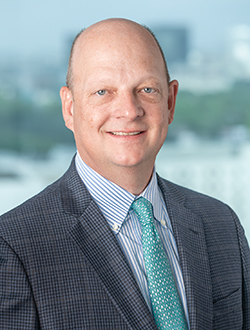 A trusted litigator for bet-the-company cases and beyond
John Barr is an experienced trial lawyer who focuses his practice on complex litigation, including intellectual property, business and tort cases. With nearly 30 trials, arbitrations and appeals over the course of his more-than-two-decade career, he has handled matters in courts throughout the United States. John has handled a variety of significant matters including multi-million dollar cases related to patent infringement, trade secrets, Hatch-Waxman, breach of contract, products liability, fiduciary litigation, oil and gas, and environmental litigation.

High-profile experience in precedent-setting cases across the country
John has been very successful in jury trials and has the ability to make complicated business and technology matters understandable to lay persons. He runs cost-effective legal teams and has been instrumental in resolving many matters before trial, whether in mediation or by summary judgment. In a particularly significant matter, John was lead counsel in one of the first hydraulic fracturing cases in the country, which his oil field service client won on summary judgment. In another products liability matter in a difficult jurisdiction, John was able to obtain a directed verdict from the court in favor of his client, a product manufacturer.