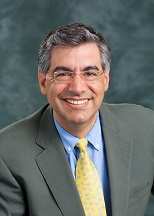 Chris Vrountas represents business clients in matters involving employment law,  commercial disputes and intellectual property cases.  He has practiced law for over 25 years and is admitted in Massachusetts, North Carolina, New Hampshire, The First Circuit Court of Appeals, The United States Court of Claims, and the Supreme Court of the United States.  He is the president and a founding shareholder of Vrountas, Ayer & Chandler, P.C.

The Boston Globe named Mr. Vrountas one of the Top Lawyers in the region in 2015, and he has been recognized as among the “Legal Leaders” of Boston. For his high ethical standards and long list of successes, he holds the highest peer rating possible of AV Preeminent* from Martindale-Hubbell. He has been selected by Super Lawyers** in the area of employment law for New England every year since 2015.

Mr. Vrountas has a deep and wide-ranging practice.  His employment practice includes  trade secret disputes and litigation over covenants not to compete, wage and hour class actions, discrimination, sexual harassment and wrongful termination claims.  His commercial litigation practice has covered commercial real estate litigation on both the landlord and tenant side, anti-trust and unfair competition claims, partnership disputes and contract matters of all sorts.  His intellectual property litigation practice has included patent litigation matters as well as copyright and trademark claims.  He has served as lead trial counsel before either the state or federal courts in Massachusetts, New Hampshire, Florida, Connecticut, Rhode Island, New York, Illinois and other jurisdictions.

Throughout his career, he has represented employers before departments of labor and the human rights commissions in multiple states as well as before the United States Equal Employment Opportunity Commission.

Along with his legal work, Mr. Vrountas also serves before the Human Rights Commission as a mediator for pending disputes. He is a member of the Greater Lawrence Family Health Center’s board of directors and he serves as a member of the executive committee as well as its corporate secretary.

** Super Lawyers® , is a trade mark of Thompson Reuters.